Liverpool close in on move for Derby youngster Kaide Gordon

icLiverpool.co.uk - Mon, 01/25/2021 - 11:00
Liverpool are continuing to build for the future with their latest transfer move for Derby youngster Kaide Gordon
Categories: More News

Liverpool exited the F.A. Cup in the fourth round after a 3-2 defeat to Manchester United at Old Trafford.

Despite a brace from Mohamed Salah, the hosts advanced thanks to goals from Mason Greenwood, Marcus Rashford, and Bruno Fernandes.

Jurgen Klopp, as is his want in the domestic cups, shuffled his pack and made some personnel alterations from the defeat to Burnley in midweek.

The visitors — in their turquoise kit — started sharply and they made it count on the scoreboard near the 20-minute mark. Firmino’s slide-rule ball sent Salah through on goal and the Egpytian cooly lifted the finish over Dean Henderson to give Liverpool a merited lead.

The midfield balance for the away team didn’t look right — with Thiago being asked to anchor the engine room an alien concept to him — and United exploited it when Rashford was given all the time in the world to lift a clipped pass into the path of Greenwood. Williams totally misread the flight of the ball and the young Englishman showed composure by drilling the ball low past Alisson after his first touch set him up to shoot.

United were buoyed by their goal and came close to taking the lead on the cusp of half time but Paul Pogba’s free-kick drifted wide and the teams went into the interval level.

The hosts started the second period with vigour and they had another goal three minutes after the resumption. A speculative, clipped ball into the channel from Greenwood was misjudged by Williams — a player clearly struggling to cope with the step-up in level — and Rashford passed upon it by clipping a low shot past Alisson. The Brazilian arguably should have done better, but United found themselves 2-1 to the good.

To their credit, the Reds improved from that point onwards — with James Milner getting to grips with the game after being on the periphery — and they were the better team. The veteran blazed over after a Thiago pass unleashed him in the box. Looking especially dangerous down the right, Liverpool knitted some enterprising moves together. Trent Alexander Arnold, who has better than his recent poor performances, tested Henderson with an angled shot, as the visitors turned the screw.

The pressure eventually told when Salah completed his brace with a low finish. Counter pressing in unison after a bad touch from Edinson Cavani, Liverpool went for the jugular, and Milner’s ball down the left released Firmino. The Brazilian then played a ball into the box that the Reds number 11 — with help from Milner — smashed low into the net.

Liverpool were the better side in the second half and they continued to probe for their third goal, even introducing Sadio Mane in place of Georginio Wijnaldum. Salah came closest when he fired a low, right-footed shot at Henderson after running onto a through ball in the right-hand channel.

United, though, introduced firepower of their own off the bench and Bruno Fernandes — their attacking linchpin — entered the fray. The Portuguese didn’t have to wait long to make an impression. After Cavani conned the referee into buying a dive from him after a tussle with Fabinho, Fernandes bent the freekick from just outside the box into the bottom right corner. Arguably, Alisson could have done better but United wasn’t to care as they lead 3-2.

Klopp sprung on Shaqiri and Divock Origi in the dying minutes but the hosts held on to advance. It was another defeat to Liverpool, whose last win feels like it was years ago, but after four consecutive games without a goal at least they scored.

Replacements: Mane for Wijnaldum, Origi for Firmino, Shaqiri for Thiago.

'We can match the best': Solskjær delighted after win over Liverpool – video

A superb Bruno Fernandes free-kick was the difference in Manchester United's scintillating 3-2 FA Cup victory over Liverpool. The hosts came from behind after an opener from Mo Salah, before goals from Mason Greenwood and Marcus Rashford put them ahead. 'We feel for us it's a good feeling to play on our terms,' said manager Ole Gunnar Solskjær, 'that's the confidence boost that we can match the best with our style of football'.

Transfer grades: Arsenal get a D for handling of Ozil exit

ESPN.com - Mon, 01/25/2021 - 08:18
The January transfer window is upon us. Here are the big deals and how we rate them, with Mesut Ozil finally leaving Arsenal for Fenerbahce.
Categories: More News 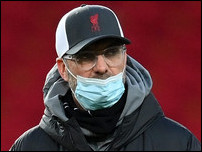 LiverpoolEcho.co.uk - Mon, 01/25/2021 - 07:52
Liverpool have been left short at centre-back after choosing not to pursue a central defender in January and it has contributed to them being knocked out of the FA Cup
Categories: More News

icLiverpool.co.uk - Mon, 01/25/2021 - 07:52
Liverpool have been left short at centre-back after choosing not to pursue a central defender in January and it has contributed to them being knocked out of the FA Cup
Categories: More News

LiverpoolEcho.co.uk - Mon, 01/25/2021 - 07:39
Liverpool lose 3-2 to Manchester United in the fourth round of the FA Cup at Old Trafford despite two Mohamed Salah goals
Categories: More News

icLiverpool.co.uk - Mon, 01/25/2021 - 07:39
Liverpool lose 3-2 to Manchester United in the fourth round of the FA Cup at Old Trafford despite two Mohamed Salah goals
Categories: More News

Ian Wright opens up on his worries over Trent Alexander-Arnold

Ian Wright opens up on his worries over Trent Alexander-Arnold